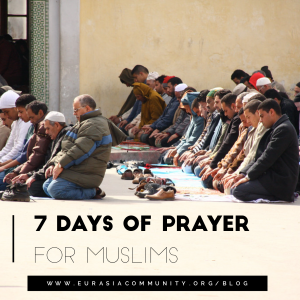 We are spending this week praying for Muslims as they make preparations for and begin Ramadan, their month of fasting. Would you join us as we pray for God to bring hope to these people who are lost and dying without him?

Today we will pray for those in Western nations who have been swayed by the promises of Islam. Traditionally, Islam has been practiced mostly in the East- in the Arab world, and Asia, and in some African nations. But in recent years there have been growing Muslim populations in the West, particularly in Europe and the United States, and not just because of immigration.

Whether they are seeking a spirituality and devout faith unlike anything they’ve seen here, or whether they’re rejecting the Church because of hurts they experienced, or for some other reason, thousands are turning to Allah and Muhammed, hoping Islam has the answers they seek. But it doesn’t. True freedom is only found in knowing Jesus.

Pray for those who have been deceived. Pray that their eyes will opened to the lies they’ve believed, and pray for a greater gospel witness in communities that are turning away from God. Pray also that God would give you opportunities to be a light to Muslims around you.

Thanks for praying. We are so glad you’re a part of this community. We couldn’t do this without you.