Arab World, Faces of Eurasia, Give No Comments
March 8, 2018 eurasiacommunity 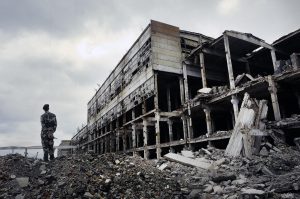 Barsa, Iraq seems like an unlikely place for the gospel to flourish.

Barsa has been ravaged by war and terrorism for decades, and was most recently subject to the horrors of ISIS.

And even now that ISIS is being driven back, the area is still ripe for exploitation by various fundamental groups in the area.

Yet, in the midst of all that desolation, we believe that the cross of Jesus is able to bring hope to people across the city, including one man who thought he was at the end of his rope.

We’re telling that story this month over at Faces of Eurasia:

“[In] a city ravaged by war, devastated by terrorism, where mere survival is a struggle….one young man felt such tremendous desperation — he was about to commit suicide. But then, in a city where the Christian population has been decimated and radical Islam has taken root, he looked up and saw the most unlikely thing: A lighted cross atop a church.”

You can read the rest of this young man’s story, and find out how you can help bring the hope of the cross to the city of Bursa right here.

Thanks for being willing to give to this important work. And thanks, as always, for being a part of this community. We couldn’t do this without you.