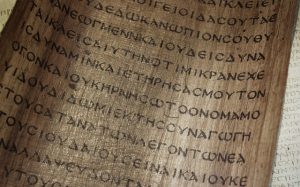 I was really good at it.

At least I thought so.

That is, until I went to Greece to study for a semester. Then, all of the verb tenses and noun declensions I’d studied didn’t seem to matter as I struggled to figure out what the woman at the convenience store was asking me. (When she realized I was less than fluent, she switched to English: “Do you want a bag?”)

As it turns out, I hadn’t learned quite as much Greek as I thought.

If you’ve ever considered coming to Eurasia long-term, you’ve probably considered that a part of working with people in a foreign country would require you to learn their language.

And maybe that’s intimidated you.

Although some people seem to be more gifted in learning new languages, for many of our workers in the past, it’s taken a lot of arduous classroom study to acquire the language of the country where God places them.

It’s not something they can skip over, because language and cultural understanding are essential to spreading the gospel among unreached people groups.

But our heart is for people to be able to acquire the language of the people where they minister as quickly and easily as possible, so they can begin to minister to those around them. And we also want to make sure that language learning is practical—not like my experience when I was a foreign student in Greece.

This new method is called the Growing Participator Approach.

It is a natural language learning approach, that is modeled more after the way a child learns to speak his or her first language. The emphasis is understanding first, and then speaking. Reading and writing come much later in the process.

If you’ve considered coming to Eurasia, bu are intimidated by the thought of learning a new language, don’t be.

This method is effectively equipping our workers to the work to which God has called them, and if God is calling you to Eurasia Northwest, we know you can do it!