The Eurasia Region is vast, encompassing 44 nations. The Regions consists of 7 areas, to better serve the unique needs and characteristics of this diverse melting pot of people and cultures. Eurasia Northwest stretches from Armenia in the south to Estonia in the north, containing seven diverse and ancient countries. They each have different cultures with different people holding different histories. They have different landscapes containing different borders. Some follow nature’s lines, and others fall along lines that contain clues to their pasts. Across all borders and cultures in Eurasia Northwest is the simple need for Jesus.

The seven nations of Eurasia Northwest share a common history as Soviet Republics. They emerged as independent nations after removing themselves from the Soviet Union in 1991 and 1992. Now, more than 25 years later, these countries are developing economically. Several of Eurasia Northwest’s countries have growing technology-based economies. The heritage of Communism, mixed with European culture, has left the people of Eurasia Northwest atheistic and secular. Most have never heard the gospel, despite the beautiful cathedrals and churches that dot the landscape. 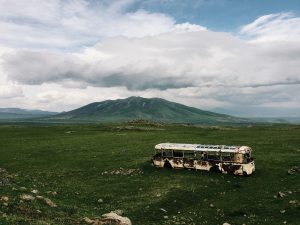 Kristen often asked about the meaning of life but found her question met with stares or disapproval. Over time she stopped asking, leaving a hole wanting to be filled. Kristen searched for life’s meaning outside Estonia, where she was born, hoping others would hold the answer. She enjoyed traveling, and through her travels always sought for experiences that might bring her closer to her real purpose. It wasn’t meant to be.

Years passed, and she was no closer to the truth. She eventually became friends with the Focus Church team in Tallinn and was invited to their Alpha course. She hoped to stump the leader with difficult questions and to reveal the hypocrisy behind their belief. Instead, she found an unexpected answer: Jesus. The ideas she fervently looked for all her life were encompassed in this one Person. She found Him in the sweet harmony of a loving church family and the powerful Word of God. Her life was forever transformed.

Millions like Kristen wait for the Good News of Jesus. Eurasia Northwest has launched the Finish Campaign to mobilize believers to adopt a country or join a ministry team by serving in a short-term, one- or multiple-year assignments.

Click below to learn more about the opportunities to serve the people of Eurasia Northwest.