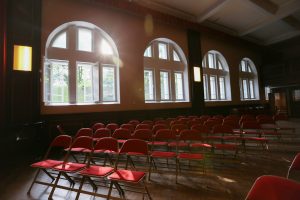 Of all the associates who gathered for Pre-field Orientation this past June (not just the ones going to Eurasia), Melody Jamieson was the oldest.

At sixty-one years old, Melody had been serving with the church for many years. But when her husband left her a number of years ago, she felt a lot of condemnation, and like she was unworthy of continuing to be used by God. She resigned her credentials, and thought that was the end of her work with church.

But God wasn’t done with Melody. He still had a plan and a purpose for her, and now she knows that part of the plans and purpose he had for her were with Eurasia Northwest in the nation of Estonia. The Lord has used her fundraising journey to confirm over and over again that He has called her and set her on this path, and that her days of work for the Kingdom of God are not over yet.

Just a few days after her appointment, Melody received a couple of very unexpected gifts towards her overall fundraising budget. First, on the very day she was approved, she received $1000 from her network’s women’s department.

Then a couple of days later, a friend offered to come along on a 6-hour trip to a conference. This friend was in the midst of selling her house, and when the money from the sale was deposited, she told Melody that she wanted to give her $5,000 from what she made on her house.

But as if that weren’t confirmation enough, Melody has continued to see God at work in the lives of those she gets to talk to as she is in the process of fundraising. One woman who gave after a meeting Melody did at her church said that she’d never felt like God spoke to her before that day, when he told her to give towards Melody’s budget.

If you’re in the midst of raising funds to come to Eurasia, or if you’re in any other season of life where it seems like you’re waiting on the Lord, and you feel that maybe He’s forgotten you, I hope that you’ll be encouraged by Melody’s story. Here is what she says in her own words:

God hasn’t given up on you or “recalled” His call on your life. But there may be a season of “character building” involved to prepare you for the amazing adventure He has in your future! Just don’t give up on the dreams He has given you. If He has called you — He will do it, just not always the way we think He should. (Aren’t you glad?)

We have a number of workers, who, like Melody, are trying to get to field to do the important work to which God has called them. Would you be praying for them with us, that God will provide for all their needs? And if you’d like to give to help them get to the field that much quicker, please email us.