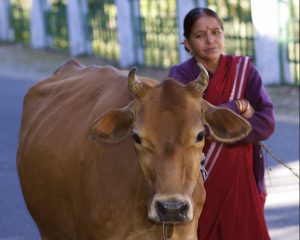 Here at Eurasia community, we want to make sure that those of you who are supporting work in Eurasia from afar are connected to the real lives and needs of those who are living and working in Eurasia right now.

We reached out to some of our workers in India this month, and asked them if there was anything we could share with you about what’s going on in their nation right now, and they asked that we describe to you how the resurgence of Hindu radicalism is affecting India these days.

We explained earlier this month some of the basic tenants of Hinduism, but one of the more well-known aspects of Hindu faith that we didn’t mention was the (literal) sacred cows. In Hinduism, cows are revered and protected because of their close association with several Hindu goddesses, and because of the many services they provide in India, among other reasons.

Recently, the issue of holding cows as sacred has taken center stage in Indian politics. The Indian People’s Party, or Bharatiya Janata Party (BJP) is an ultra-conservative party, which aims to remove Western influence from India and redefine India as a solely Hindu nation.

The trouble with this, though, is that though India’s majority religion is Hinduism, there are significant populations of other religious groups living there. In fact, India has the third-largest Muslim population in the world, after only Indonesia and Pakistan.

Under BJP rule, movements like the Gau Raksha campaign, which seeks to protect cows from being transported for illegal slaughter, have gained popularity. Vigilantes are attacking and abusing minorities within India who make their living legally selling and transporting cows.

All the lost in India need salvation, not just the Hindus, and this violence is affecting some of the unreached people groups who still have yet to hear the good news of the gospel. You can read more about this crucial issue here. But more importantly, would you join with us in praying for India during this politically uncertain time?

Thanks for your prayers! And thanks, as always for being a part of this community. We couldn’t do this without you.