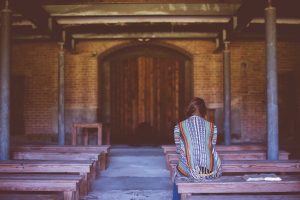 Photo by Ben White on Unsplash

One of the monthly features on the Eurasia Community Blog is about our Financial Partnership Development program, led by Jenn Fortner. In FPD, missionary associates receive small group training and coaching as they invite individuals and churches to partner with them financially in the work God has called them to in Eurasia. This testimony is from one of our new workers to the Arab World area, Beth.

Beth had known since she was 14 that she was supposed to do work overseas, but a dream the Lord gave her in 2012 convinced her that the time had come for her to begin stepping into that calling. At the time, she didn’t know how to begin; she was in a secular job, and very much in debt.

But as she continued to trust God to lead and provide as she pursued coming to Eurasia, the lord used an injury at work to provide for Beth in astounding ways, allowing her to dramatically reduce her debt.

Despite this, however, Beth had a hard time believing that she would be successful fundraising.

She did not have a lot of contacts of people she could ask to partner with her in her work overseas, and her first few attempts to make calls and send out letters were met with little success.

At the beginning of this year, Beth received an email from a friend of a friend, a woman she had never met. She was interested in supporting Beth and asked for a meeting. A few days before their meeting, this woman asked Beth to share in her Sunday School class.

Beth agreed, during her quiet time a couple days later, she felt like God gave her an entire sermon. She said she remembers feeling silly for preparing so much for a small class, but after worship the Pastor said he had decided to have Beth be the main speaker for the morning’s service.

Beth said she was completely blown away, but knew that God had orchestrated this beforehand and had prepared her by giving her a message to share. The church was small, with only about 12 people in attendance, and they didn’t take an offering for her, but she had a great time sharing her heart for Eurasia with them.

Then, about two weeks later, Beth was driving when she received a phone call from the church secretary with the news that the church wanted to support her. From that tiny group of twelve people, Beth received commitments for $12,400 support.

It was a confirmation of the verse that God had given to Beth at the beginning of her fundraising: “Do not despise these small beginnings for the Lord rejoices to see the work begin.” Zechariah 4:10

Whether you’re fundraising right now, or newly begun serving in Eurasia, or doing any other kingdom work, and you’re feeling discouraged because things aren’t going quite like you thought they would, take heart.

God can make much of our small beginnings, and will do whatever it takes to see his will fulfilled as we give our lives to Him!